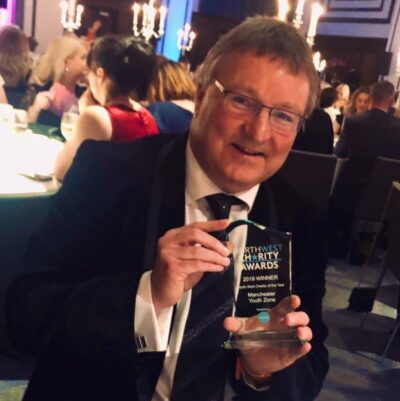 Chief Executive Richard Marsh announces his plans to retire this Easter, following 6 years at Manchester Youth Zone, and a career spanning 38 years dedicated to supporting young people most at a disadvantage. Staff at the Youth Zone expressed their excitement for Richard in his next chapter which will enable more time to spend with family, walking and travelling and also the loss they will feel when the time comes, of a leader who has guided the organisation to financial sustainability whilst holding young people and their needs at its core.

Richard is, and has been, a popular and fair Chief Executive, passionate about creating links across the city, and ensuring that North Manchester is recognised for all the right reasons, with young people receiving the support that they need to level the playing field. When he’s not securing new income or creating new partnerships, Richard can be found coaching football to Junior members at Manchester Youth Zone, and never shy’s away from getting involved in everything from food deliveries as part of the Holiday Hunger programme to litter picking. He is an inspiration to staff and young people alike.

He has been passionate in highlighting the issues surrounding child criminal exploitation across the region and has implemented programmes which have had a significant impact in reducing the vulnerabilities of young people. Through his work at Manchester Youth Zone, Richard has offered a solution to serious youth violence and child criminal exploitation and continues to fly the flag for preventative work around the issues.

Richard is a transformational leader who very rarely celebrates his own success and achievements. He has instilled in the staff team that he has built around him the notion that there is always more to be done, more opportunity to create and more young people to work with that need support – consistently encouraging the team to adapt, improve and grow, whilst taking chances and overcoming challenges to believe in themselves and the young people that they seek to support.

Richard began his work with young people, starting out as a volunteer for The Prince’s Trust as a mentor and grants assessor in 1984, by 1990, he was Chair of the Lancashire Prince’s Trust. Additionally, Richard was a founding Trustee of Nightsafe young person’s homeless accommodation in 1991 stepping down in 2002. He remains a Trustee of Blackburn Community Sports Club and is a Goalkeeping coach, something he has done for over 15 years reaching over 1000 young people.

Throughout his work he has never taken the easy route and worked in some of the most difficult areas of the region seeking always to make a difference. He has inspired young people and colleagues alike, and his team at Manchester Youth Zone, alongside the board, wish to extend their huge gratitude for his leadership over the last 6 years.

Chris Davis, Chair of the Board at Manchester Youth Zone says “I was hoping that the new year would bring some good news. For me this is bittersweet. I wish Richard all the best for his future and I am very grateful for what he has done with the charity. He will be difficult to replace, but the fact is that we all do move on and he has decided that now is the right time to do so. Richard has been an absolute delight to work with. He has lead a team that has built an amazing offering. He should be very proud that he leaves the charity in a much stronger position than when he joined it ”

“I have been lucky enough to work alongside some fantastic people that make my job, if not easy, then extremely enjoyable. In my role as CEO of Manchester Youth Zone, I had one vision – to change the lives of the young people with whom we work, to believe in young people and to create opportunities for them.

There is always more to be done, new challenges present themselves every day, along with more young people that need our support. In the next few months, it will be time to think through how we offer services to young people, families and the community post Covid – the world certainly will not be the same and new thinking will be needed.

With MYZ in a good position as a thought leader in the city, it therefore feels the right time for me to step back and have someone else lead my dedicated team to continue to give young people their greatest possible futures.

I have enjoyed every day at Manchester Youth Zone and will miss the friendships and sense of achievement in making a massive difference to the lives of young people and our community.”