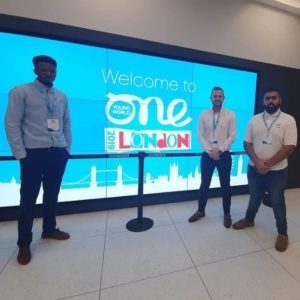 A fantastic opportunity for Mo, Savannah, Hallie and Samuel, four of our Senior members who attended the One Young World Summit in London.

The annual event brings together the most talented young leaders from global and national companies, universities and other forward-thinking organisations. Delegates meet and make lasting connections with peers from almost every industry, sector and country.

No youth led movement outside of the Olympic Games represents as many nationalities as the One Young World Summit. The idea is to come together to make an impactful change on the world, based around education, sustainability and climate change.

Ambassadors from across the Onside Network were invited along to the summit – Mo, Savannah, Hallie and Samuel are ours –  supported by their mentors from AO.com to complete a community action project over the next 12 months.

The group gained lots of experience through networking through the dinner and listening to key influential speakers such as, Sir Richard Branson, Meghan Markle and J. K. Rowling at The Royal Albert Hall. “I enjoyed the One Young World event,” said Mo. “The best part was networking, meeting new people and learning about people’s past experiences of slavery. It was a great experience and it brought together different cultures of people.”

Savannah, a Senior member at MYZ: “At the One Young World event we saw lots of inspirational people from which I learnt so much from. I enjoyed doing my speech in front of 200 hundred people, something I have never done before.”